A 27-year old unemployed graduate, Nsisong Okon Etim, has committed suicide in Uyo, Akwa Ibom state citing hardship and constant harassment for rent by his landlord as reasons for his fatal action. 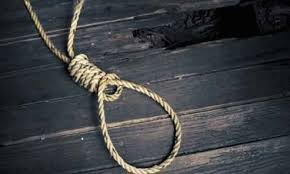 The deceased, who lived along Ubong Edet Street within Effat Ikot Udo Offot community in Uyo is said to have completed his National Youth Service Corps (NYSC) last year, and had taken to private business of retailing of cooking gas along the Old Ring Road, Uyo, “because of inability to find immediate job”.

The deceased Nsisong, said to be one of the sons of the late Village Head of the community, Chief Etim Eton, according to her sister, Miss Edidiong Okon Etim, “was very discreet and keeping always to himself.

“He rarely eats from our mother’s kitchen; he normally cooked for himself until he returned on Tuesday, July 23, 2019 from his shop in the evening and ended his life that night”, she explained amid tears.

It was gathered that the deceased had locked himself in his room was later found hanging on the rafter dressed only in boxers.

In his suicide note, the late Nsisong states that he had to take the hard decision to escape from constant worries and disturbances from his mother, step-brother and the landlord whose shop he rented to sell cooking gas.

His distraught mother, identified as Mrs. Patience Eton, was still in shock when his remains was lowered from the rafters for ritual and burial, as such could not speak.

“I have seen him recently; he is a very reserved introvert who was not given to a socialist kind of life. In fact, if you come face to face with him on the road, he would hide his face and would not greet or talk to you.